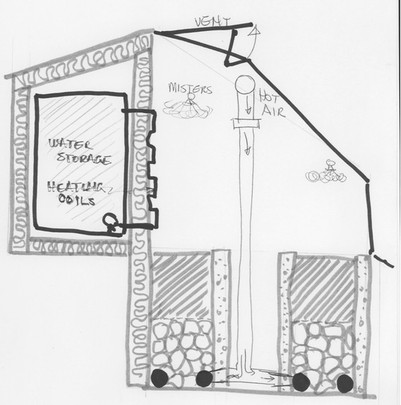 This greenhouse was designed to manage heat and watering as inter-related processes with a minimum of cost and effort.

It uses four systems to regulate heat, water and costs about $6.00 a year and needs little management.

The main functions of a greenhouse are to manage heat and photosynthesis.  The problem is to keep the greenhouse warm during the colder night periods, and avoid over heating during the day time. Four processes that aid in achieving these ends are outlined below.   The common problems is too little heat incoming during dark period when greatest temp variation between inside and outside and also associated heat losses from greenhouse and too much heat gain during sunny periods, causing overheating. The builder need to understand some basic principles: these are about: : Solar inputs, insolation, albedo, short to long wave light. Heat loss characteristics, additional heating during colder periods. Conduction, Convection, Radiation, Evaporation

Heat management through moderation and automated systems
Automated systems that work well and are simple and inexpensive to operate provide significant benefits.
They tend to not forget to do a task ie opening vents to cool the greenhouse so everything is cooked or forgetting to water so all the plants die.  This site describes inexpensive automated processes that work well 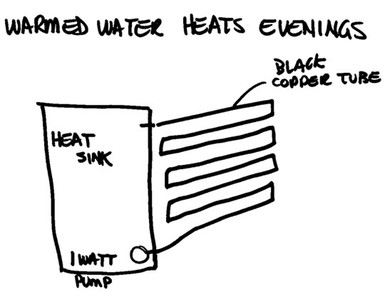 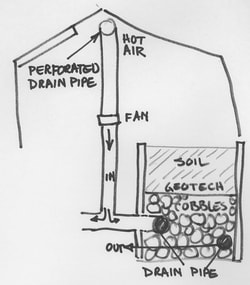 This system is made up from 4 inch perforated PVC pipe, a 6 watt fan, large cobbles under the beds, geotech fibre above the cobbles and two perforated pipes within the cobbles.  The warm air from the top of the greenhouse is pushed through the rocks, heating them during the day, warming the beds and readmitting some of the heat during the night period. The net effect is to moderate the greenhouse temperatures.

How to adapt a used computer fan for air circulation 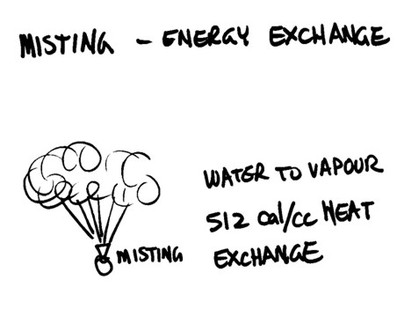 This system uses mister watering on a timer.  The heat absorbed by vaporization  of water droplets lowers the greenhouse temperature an average of 5 deg C, while meeting the plant water needs. Some additional watering is required but this is reduced to one to two times a week. 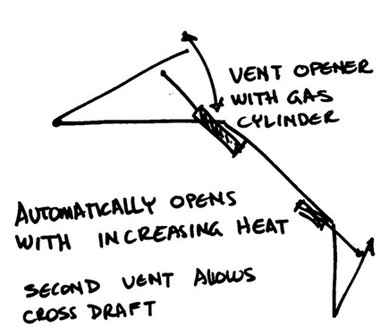 This system uses gas or paraffin vent openers. This system in the override arrangement kicks in when overheating occurs.  These cylinders automatically open and close the ridge vent depending on the temperature. The vents should be arranged to take advantage of convection and any possible cross drafts.  These openers open wider as it gets hotter, allowing increased cooling.  Don't forget to bring these in before the winter cold weather. They don't like -40 deg C.

During the last green house design class. I was asked to describe ow I made the automatic vent openers.  I buy only the cylinder and make my own openers.  I find then easier to instal, far less expensive and operates well. The following pictures show how I do this.

After cutting the peices, I cut the rod down the middle of the long axis for about 2 cm.  I then drill two holes in the base of the channel and wo holes in the gray bracket.  These holes will be used to secure the apartus to the window and the window sill. 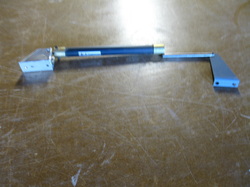 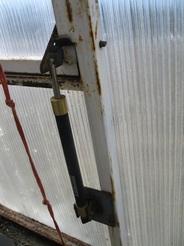 The picture to the left shows an installed vent opener using the arrangement I described above. The closer the bracket is to the window hinge, the more the movement of the cylinder will be exaggerated in the window opening. The cylinder will move about 5 cm. In this case, the window opens from the top. If your window opens from the bottom, simply change the orientation of the opener and window bracket.  This was an early version, but the model I describe above works every bit as well. 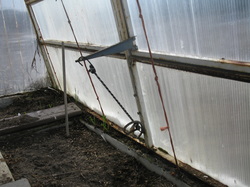 This photo shows how I have used a bracket and shock cord to pull the window closed.  This has worked well even in heavy winds.
Through the operation of this system over the past 14 years, I have found the water heat storage system to be quite ineffective and have stopped using it.  The heat sink in the rocks have been by far the mose effective part of the heat management system.